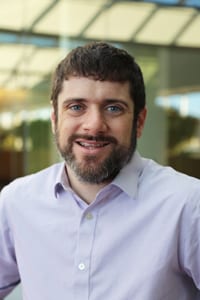 Starting as a graduate research assistant in 2006, Bockelman has been a collaborator on the Compact Muon Solenoid (CMS) detector at the Large Hadron Collider (LHC), one of the world’s premier High-Energy Physics experiments. Beginning with the deployment and operation of the CMS computing center at UNL, he has made a tremendous impact on the CMS Software and Computing organization. Accomplishments include the adaption of new distributed filesystems, design of CMS’s global data federation, delivering the global resource pool, and numerous scaling improvements to HTCondor. He has served on management roles within the U.S. CMS organization and recently completed a term as leader of the Data Management and Workflow Management development teams. The next era of particle physics will begin with the HL-LHC particle accelerator; Bockelman is co-PI of the $25M IRIS-HEP institute to develop critical software technologies for the HL-LHC.

In 2008, Bockelman began collaborating with the Open Science Grid (OSG) and today serves as the Technology Area Coordinator, leading the evolution of the technologies used by the OSG. The OSG, led by Prof. Miron Livny, is the nation’s flagship platform for DHTC, enabling over 1.6 billion computing hours per year, equivalent to over 180,000 CPU cores. With OSG, Bockelman has overseen several of the project’s successful technology evolutions, including work in computing, storage, and software packaging.

Within Nebraska, Dr. Bockelman served as a key staff member of the Holland Computing Center (2008 – 2019) and as an Associate Research Professor in the Computer Science and Engineering department (Asst. Rsch. Prof 2013-2018, Assc. Rsch. Prof 2018-2019). At UNL, Bockelman additionally led several NSF-funded CS research projects such as Lark (NSF #1245864), SciTokens (NSF #1738962), DIANA (NSF #1450323), and SAND (NSF #1827116). Moreover, the computing center provided Bockelman with a broad scope to advance the work of individual scientists and help develop the universities computing infrastructure; this focus on and enthusiasm for Research Computing is most exciting aspect he carried forward to Morgridge.