News & Stories > From physics to fitness, athletes in science challenge minds and bodies

From Rosalind Franklin to Edwin Hubble, history has shown that athleticism and scientific prowess are not mutually exclusive traits.

Two scientists at the Morgridge Institute for Research are proving this once again, challenging both their minds and bodies in a variety of ways.

Some might say they’re scientists by day and athletes by night, but the truer picture shows the delineation isn’t so clear. Both Schroeder and Kemmerer have fully integrated their dual priorities into their lives.

Alexandra Schroeder: From physics to fitness 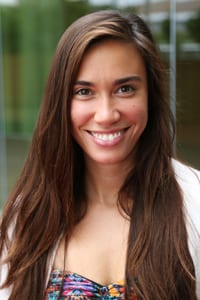 For Schroeder, everything began when she started her undergraduate degree at the University of Wisconsin-Madison.

“When I came to Madison, I felt like physics was my life calling and I wanted to go into high energy particle physics research,” says Schroeder. “But I started to try new things, including going to fitness classes at the SERF.”

Soon, attending fitness classes turned into an opportunity to teach classes and Schroeder jumped at the chance. Instructor training involved a full semester of anatomy and physiology lectures, educational practices, and workshops geared toward movement and health in fitness.

“I realized I was getting this tremendous joy by helping people and that, in turn, impacted my opinion of physics,” Schroeder says.

She wanted a way to combine her interests in the worlds of physics and health to improve people’s lives.

“Medical physics became my calling, kind of in tandem with becoming a fitness instructor,” Schroeder says. “I realized that I want to use whatever skills I have to help people, whether it’s standing on a stage and teaching how to do a squat or if it’s being able to look and identify where someone’s tumor is.”

Visualizing cancerous tumors using fluorescence imaging is a large part of the research Schroeder is conducting at the Morgridge Institute. In patients, differentiating healthy tissue from tumor tissue is critical, particularly when it comes to surgery. Fluorescent probes, molecules that absorb and emit light, can selectively enter different tumor types and be used to light up the tumor tissue so it can be easily identified.

Schroeder conducts research in the Morgridge Institute Medical Engineering theme under the mentorship of Morgridge investigator Kevin Eliceiri and says the diversity of skills and projects represented across the team enhances everyone’s knowledge.

“I love the collaborations here,” says Schroeder. “I think the collaboration opportunities are what make this an incredibly unique space, and it’s something that us as scientists need to keep happening in order for change to occur.”

Collaboration and teamwork also play a part in Schroeder’s athletic endeavors, particularly when she competed in the ESPN BattleFrog College Championship. The BattleFrog competition involves a sprint track obstacle course, built by Navy Seals, that challenges the competitors on strength, speed and endurance.

Relay teams consist of two men and two women from invited universities. Schroeder decided to try out for the 2016 UW-Madison team after talking with a friend and fellow fitness instructor.

“Climbing ladders, sliding into a wet pile of mud, then jumping over a 6-foot wall… BattleFrog was so different from the things I normally do,” says Schroeder. “It’s more on the higher risk end of training, but I tried it out and had an awesome time.”

Schroeder didn’t play team sports in the past and says competitive athletics never clicked with her. BattleFrog gave her the opportunity to experience something new.

“I don’t consider myself competitive in athletic terms,” says Schroeder. “[At BattleFrog] I met tons of really kind people who are focused and so encouraging. That’s one thing I have realized about sports, they have amazing team-building aspects.” 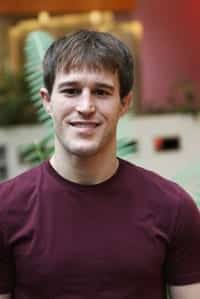 Kemmerer, on the other hand, has been competing athletically most of his life, eventually leading to him wrestling at the high school and collegiate level. He was a NCAA All-American wrestler during his time as an undergraduate at the University of Pennsylvania.

Today Kemmerer is a Ph.D. student in biochemistry who spends his time honing his ninja skills and conducting research in the Morgridge Institute Metabolism theme under the mentorship of director Dave Pagliarini, a combination that’s earned him the nickname “The Science Ninja.”

Earlier this year, he competed in the eighth season of American Ninja Warrior, earning the 15th fastest completion time in the Indianapolis qualifying round before being eliminated in the regional finals.

Kemmerer most recently, along with two other UW-Madison students, competed in the first season of Team Ninja Warrior: College Madness, an offshoot of the franchise that involves a team-based obstacle course race.

“It’s really cool because it’s people who have been yearning to be on this show for years, people that started training when they were 14,” says Kemmerer. “They’re hungry and they really want it. It’s not about the fame and the money, it’s people genuinely loving what they’re doing.”

The college edition of the show exploits historical college rivalries and engages in new ones. The competition features 16 teams of three collegiate athletes each, two men and one woman per team. With five episodes in total, the series premieres Nov. 22 on Esquire.

But the Science Ninja will be making a public appearance before the season premieres, as part of the 2016 Wisconsin Science Festival held Oct. 20-23. The annual science festival is a statewide event that engages the public in science topics over four days. Kemmerer will be a participant in several events and emceeing others.

At the Friday night Science Arcade, Kemmerer will bring some safe and simplistic ninja-esque obstacles for kids and adults to try.

He also helped conceptualize an ongoing festival event inspired by the Brewers baseball sausage races. Instead of sausages, people will represent components of the electron transport chain and metabolism.

The metabolism theme ties back to Kemmerer’s research at the Morgridge Institute, which focuses on identifying the functions of different proteins in mitochondria. Often referred to as the “powerhouse of the cell,” mitochondria are responsible for energy production. It’s fitting that Kemmerer’s science ninja catchphrase is “Powered by Mitochondria,” a nod to the research he does and how our bodies produce energy.

“It seemed like a perfect fit for me to be involved in the science festival, and this year I want to be right in the middle of it,” says Kemmerer. “It’s an incredible opportunity to get some people interested in science, fitness, the ninja stuff. All of it.”

Both Kemmerer and Schroeder will be part of the 2016 Wisconsin Science Festival. See event details below.

Zack Kemmerer will be involved in several events over the days of the festival.

Alexandra Schroeder will be presenting at Big Ideas Busy Scholars on the cellular characterization of tumor targeting agents, Friday, Oct. 21, 4 – 5 p.m. at the Discovery Building.