Unlike the assembly of a machine, there is no “one-size-fits-all” approach to medicine. Darryl Thelen, professor in mechanical engineering and biomedical engineering at the University of Wisconsin-Madison, conducts research with this notion in mind while using computational models of the musculoskeletal system and high-throughput computing resources to refine knee surgical procedures.

“What we do is use mechanics—all the things people use when designing cars such as how motors drive movement—and use those ideas to analyze how humans move,” Smith says. 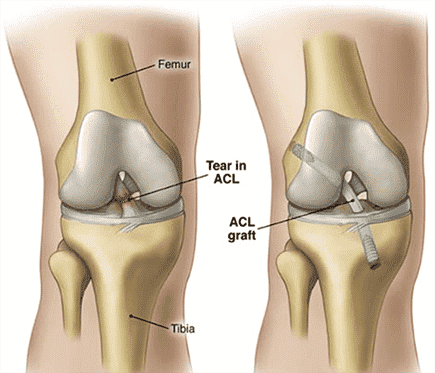 Often triggered by young people playing sports, nearly 200,000 people tear their ACL each year. Simulation of the movement and internal loading of the knee lends guidance to positioning the graft at angles that will optimize recovery and reduce future complications. From Wooster Orthopaedic & Sports Medicine Center

Thelen and Smith specifically look at knee surgical procedures and the complex variables that affect the outcome of surgeries. When somebody tears their anterior cruciate ligament (ACL), the surgeon must adjust a multitude of surgical parameters while performing the operation to achieve the best outcome for the patient. Such parameters include how tight to pull the graft before fixing it to the bones and what location and angle to attach the replacement ACL.

While ACL reconstruction surgeries can enable individuals to return fully to activity, high rates of osteoarthritis, a degenerative joint disease, are seen 10-15 years after the procedure. Thelen and Smith want to come up with a strategic way to tell orthopedic surgeons, with increased certainty, what surgical adjustments may reduce the risk of osteoarthritis for each patient.

In order to do so, their lab uses OpenSim software to investigate joint contact pressures by simulating movements such as walking, running and stair climbing. OpenSim is a freely distributed open source software package developed under a Biocomputing grant from the National Institutes of Health and used around the world to model the musculoskeletal system.

“We knew we needed to perform a lot of simulations. So we had to go beyond running simulations on a single computer to utilizing a high throughput computing platform, which enabled us to do the simulations in parallel,” Thelen says. 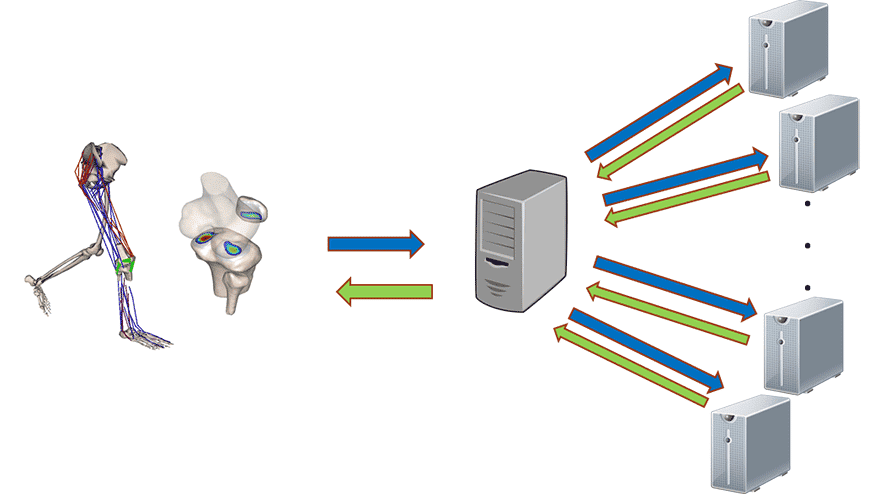 High-throughput computing resources speed up the process of knee modeling simulations by sending jobs to many computers rather than just one. From OpenSim Webinar on November 17, 2016.

Supported by the National Science Foundation (NSF), the National Institutes of Health (NIH), the Department of Energy (DOE), the Morgridge Institute for Research, and various grants from the university, the Center for High-Throughput Computing (CHTC) provides computing technology to researchers like Thelen and Smith in need of extensive computing resources. With the help of the CHTC, running 3,000 simulations takes about two hours rather than the estimated 1,500 hours on a single computer. The CHTC uses HTCondor software, developed within CHTC to schedule and send jobs to large grids of computers. This enables researchers to run simulations on open computers across campus, including the undergraduate computer labs and research-oriented computing clusters, as well as computers belonging to CHTC. The CHTC also takes advantage of the resources of the Open Science Grid, consisting of computing and storage elements at over 100 individual sites spanning the United States.

The use of high throughput computing and probabilistic analysis helps scientists, like Thelen and Smith, answer research questions and speeds up the process in doing so. With the ability to run simulations on a multitude of computers, scientists can run hundreds of tests in a fraction of the time. This technology allows researchers to get to results, change their approach, or do exploratory work more quickly.

Christina Koch, a research computing facilitator with the CHTC since November 2014, assists researchers in using the large scale computing resources available to them.

Koch’s background in math, computing, and computing education led her to take on the position of a computing facilitator. On any given day, Koch helps researchers solve problems, think critically about their work, and assists them in discovering how to best leverage the resources at CHTC to transform their research.

“I’ve had a good day if I’ve helped someone overcome a hurdle that allows them to move forward with their work – whether that be solving a specific problem together, helping them learn something new, or hearing about what they were able to accomplish on their own,” Koch says. “It’s great to hear that someone was able to finish their dissertation research, get a paper in, or expand the scope of their project – just because they could access computing through CHTC and there was someone there to help them move forward.”

The computing power of the Open Science Grid coupled with freely available software such as OpenSim is something Koch principles as a major gateway in the scientific community. Easy access to so much computing power allows researchers to try new approaches or methods that just wouldn’t have been possible before.

What does the future hold for OpenSim and knee modeling? Through more OpenSim simulations, researchers hope to devise subject-specific treatment plans and have a better grasp predicting surgical outcomes. Smith hopes to see this research progressing into personalized medicine where surgeries are pre-planned and knee replacement implants are optimally designed.