John Durant remembers precisely when and where his scientific career veered from traditional academy into the world of community science outreach. Call it the invitation that rolled downhill.

Durant is director of the Massachusetts Institute of Technology (MIT) Museum, where he began in 2005 after decades of leadership at major British science museums. This summer, Durant joined the scientific advisory board of the Morgridge Institute for Research, where he will give guidance to an outreach program that attracts more than 30,000 people annually to the Discovery Building. 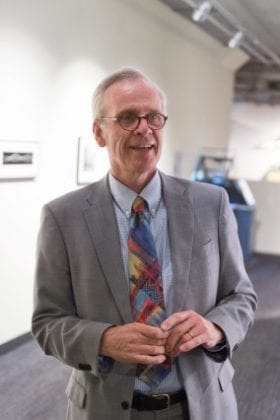 He is also widely recognized as the leading force behind the science festival renaissance in the United States, which has grown from two festivals in 2005 to more than 50 today. In fact, at some point in fall of 2016, Durant reports that American science festivals will have hit the milestone of two million participants.

This passion for “explaining science to non-scientists” has its roots in Durant’s early-1970s graduate student years at the University of Cambridge, where he studied history of science. The department received a written request for someone to teach a 10-week evening class in a small village about an hour from Cambridge. The subject matter would be Charles Darwin and evolutionary history.

“This bounced down the department,” Durant recalls. “Nobody wanted to spend 10 Wednesday evenings in a little village in the middle of, as they say, nowhere. And it finally arrived at me, one of the most junior people at the department. I was last port of call.”

As a scholar of evolutionary history, Durant was intrigued by the possibilities. So for the following 10 Wednesdays, he took a bus to the town and met about 20 adult students at the village hall. They were mostly farmers and laborers, with little to no higher education background, but a strong curiosity about the topic.

For the first class, he decided to start at the beginning of modern science and the work of Copernicus. He checked out an orrery — a physical model that shows the movement of planets around the sun — from a his department’s museum and hauled it along on the bus. He used it to help illustrate how Copernicus “first persuaded us that the Earth is not at the center of the universe.”

After the lecture, a farmer in his 50s came up to thank Durant. “He told me it was the first time he understood why the moon changes shape over the course of a lunar month.” This was coming from a man who spent a great deal of his life outdoors, no doubt witnessing hundreds of lunar cycles.

“This was such a buzz to me, to think that he suddenly had this insight and was so pleased by it,” says Durant, who is an adjunct professor in MIT’s Science, Technology & Society Program. “So I really became intrigued by the whole idea of science outreach at this stage.”

Today, the science festival movement demonstrates that scientific engagement is taking on a decidedly populist form. The efforts started in places like Cambridge — home to MIT and Harvard University — Philadelphia and the Bay Area, big urban centers with scientific critical mass and healthy budgets. But the second wave, being supported by the Science Festival Alliance headquartered at MIT, is happening in smaller geographic areas, and many have statewide aspirations.

“One of the mantras of science festivals is not only doing things where the outreach people are, but, as we say, going to where the people are,” he says. “A lot of festivals have a dispersed portfolio of events across a diverse range of sites.”

The Wisconsin Science Festival (Oct. 20-23, 2016), now in its sixth year, is a nice hybrid of the two approaches. UW-Madison started as the primary hub of the festival but it has truly grown statewide in scope, with more than 60 programs last year offered outside of UW-Madison, from Bayfield to Baraboo.

Science festivals work so well in part because of their “big tent” mentality, that encourages content and styles and involvement levels that can reach big audiences. There is also a tendency to unleash creativity in ways that make people rethink science, Durant says. The latest includes live storytelling events around science, such as the physics-based “Story Collider,” or quirky behind-the-scenes talks like “Nerd Nite,” or rapid-fire elevator-pitch sessions like “Big Ideas for Busy People.”

“This is all good,” Durant says. “I think it’s really helping to get science into the wider culture and stop it from being this kind of ghettoized, separate thing apart.”

But this era certainly has its public science challenges as well. “It can feel like you’re making no progress at all when you hear stories about congressional science committees who don’t seem to either know or care about science. It’s also striking that we’re living in the early years of the 21st century, and it’s become fashionable for people to become active skeptics of established science.”

Far from his curious village students 40 years ago, many people are now pushing back on evolution, on climate science, and even on some biomedical science, such as the anti-vaccination movement. Some people almost are creating their own “alternative reality,” Durant says. “They say, ‘We have our own experts and our own sources and we don’t accept yours.’ ”

“On the other hand,” he adds, “I’m very encouraged by the way the scientific community has become more and more conscious of its responsibility to communicate.”