BioForward, promoting innovation in Wisconsin’s growing biotechnology industry, hosts the summit annually. The showcase features early stage companies that have transitioned successfully out of research and development, with good proof of concept for their products, says Brian Moeller, operations manager at BioForward.

Gel electrophoresis allows for the separation of macromolecules, like DNA or proteins. Combs are used to make separate wells in the gel for different samples, useful for comparison and analysis. The idea for the new gel combs arose when Copeland, a postdoctoral fellow in the department of chemical and biological engineering at UW-Madison, was looking for a custom gel comb for his research.

“Matt came to me because we make things,” says Cox, who works as part of the Morgridge Institute for Research medical engineering team. “He asked if we could make a 9-well gel comb. There’s this simple problem where they have eight PCR tubes in almost every experiment, and they have 8-well combs, but you always need to run a control. You need nine wells, not eight wells.” 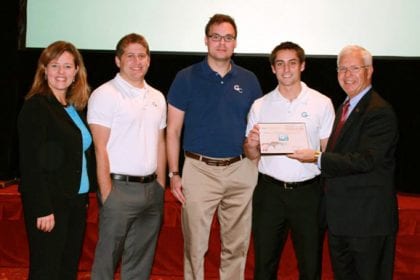 They made a 9-well comb the next day and realized the product was easy to fabricate and may be of interest to other research groups.

Walker, also a member of Morgridge’s medical engineering team, says they’ve gotten positive feedback about the combs, but the challenge is getting the word out that possibilities for customization exist.

“A lot of biologists don’t even think about buying a different type of gel comb from their typical supplier,” Walker says. “But once they try these, they see how they make their experiments more efficient.”

The team has gone through several iterations of the design after getting feedback from users and offer three standard comb designs: a 9-well comb, a 17-well comb and a gel extraction comb.

While functionality is the key component, the Gel Combs group has found the design and bright colors also appeal to their customers.

“They are more aesthetically pleasing—it’s kind of like the Apple of gel combs,” Walker says. “It makes a difference when people are determining what to buy. Our combs are less expensive than the typical manufacturer’s, they’re more colorful, they’re labeled, and you can put a custom laser-engraved logo on the comb.”

The combs are primarily manufactured in the Morgridge Institute fab lab, but the team also takes advantage of the resources at Sector 67, a popular Madison maker space.

The BioForward event gave more recognition to the products and allowed the Gel Combs team to make connections that could inform their future efforts.

“We’re trying to decide if we want to expand horizontally or vertically,” Cox says. “We could make other products that have nothing to do with gels, or we could make the systems that people run gels on a little smarter. That’s the debate we’re working through now.”

See a presentation about Gel Combs below, given by Matt Copeland at the PechaKucha event held in August at the Monona Terrace.