News & Stories > Mastodons, brains, and a view of Mars: How the Wisconsin science festival helps bring kids and science together

Last weekend, excited young people darted about with a delirium I haven’t seen since the Pokémon craze. The University of Wisconsin-Madison was the home base for the Wisconsin Science Festival that included 54 communities, leaving every citizen within an hour’s drive of an event.

Every corner of the Discovery Building contained something for people to see, hear, touch or manipulate. Kids lined up to snap on purple latex gloves and touch a real human brain. Brave guests held a five-foot-long ball python, with its powerful brown and black body twisting around arms and torsos. One stocking-capped girl was dancing from station to station, shouting “I love science! I never want to leave!”

As an astronomer who has always loved science, it was a thrill to see kids enjoying themselves. I will readily admit that scientists often have something of a PR problem. People often think of us toiling in ivory towers, spinning complex theories understandable only to other scientists. Dispelling that image is one of the prime objectives of science festivals.

To help achieve that, we wanted to show that science is all around us. In Eau Claire, brewpub guests considered the chemistry of water, wood, smoke and meat that transforms their favorite barbecue. Sometimes, science is literally underfoot. In Cambridge, hikers searched for fossils along the exposed rock face of an old quarry. In Lodi, families navigated a massive corn maze made into a trilobite fossil.

We also wanted to show the grandeur of science. In one exhibit, kids lined up with 3D glasses to view a wall-sized landscape of Mars, led by a woman in a blazing orange NASA jumpsuit.

Science festivals also are as much about questions as answers. Nearly every station had one: Why study fruit flies? What’s in your water? What are water bears? Is science sweet or sour? Can you turn a banana into a keyboard? At UW’s Geology Museum, which houses numerous fossils in rocks, and skeletons of dinosaurs and mammoths, one girl about six years old was so excited to share everything she learned, she would grab the hand of anyone in the vicinity and say, “let me tell you what I know about mastodons!”

Getting kids excited about science is of course the main objective of festivals. But I will readily admit that scientists have another motive. We have a long history of running up against societal issues, dating back to the 17th century when Galileo Galilei postulated that the earth was not the center of the universe as the Catholic Church maintained.

We now face a similar problem with global warming. Despite ample scientific evidence that the Earth’s atmosphere is growing warmer due to human activities, many people remain unconvinced. Part of the problem is that some, perhaps out of fear for what it means for their livelihood, would rather not accept the findings of science. To relate this to the here-and-now, we made an exhibit about mosquitos – the population of which has been exploding due to global warming – with iPads configured as microscopes that showed the four growth stages of that pesky insect.

And we can be heartened that one of our signature events, “Not Like it Used to Be,” which addressed how climate change is affecting Wisconsin’s cherished outdoor activities, was also one the most well-attended, with 200-plus participants.

If a middle school group exploring the campus is any indication, I think we won some supporters. Proudly sporting the bright orange Wisconsin Science Festival drawstring backpacks, they gave everyone who passed them a high-five and an enthusiastic, “science rocks!”

Eric Wilcots, the Mary C. Jacoby Professor of Astronomy and Associate Dean for the Natural and Mathematical Sciences, also served as co-director of the 2017 Wisconsin Science Festival. The festival is co-sponsored by UW-Madison, the Morgridge Institute for Research and the Wisconsin Alumni Research Foundation. 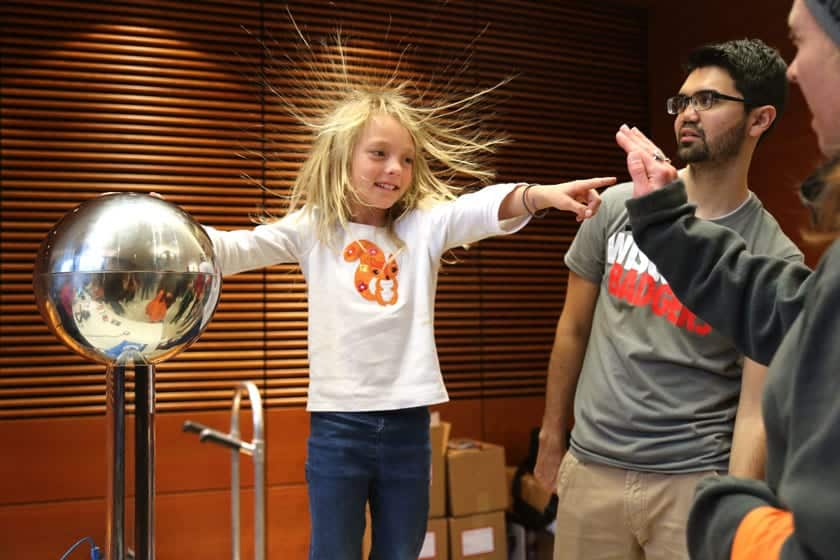 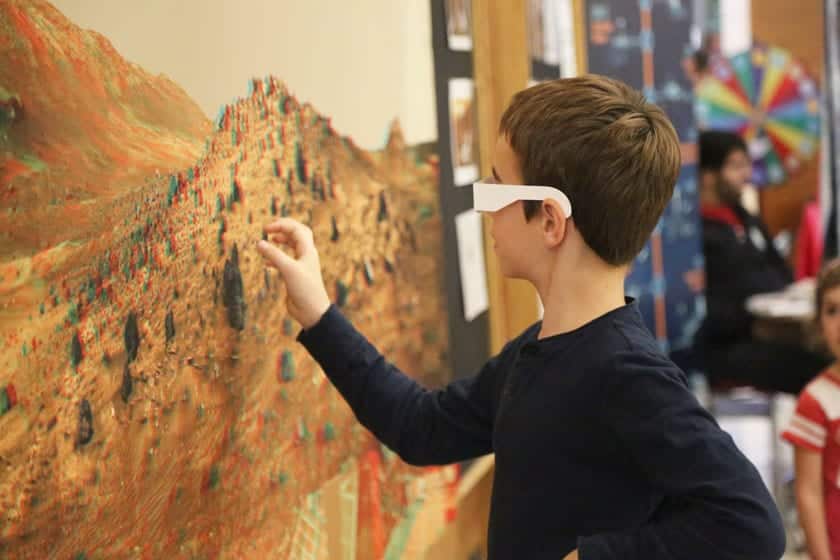 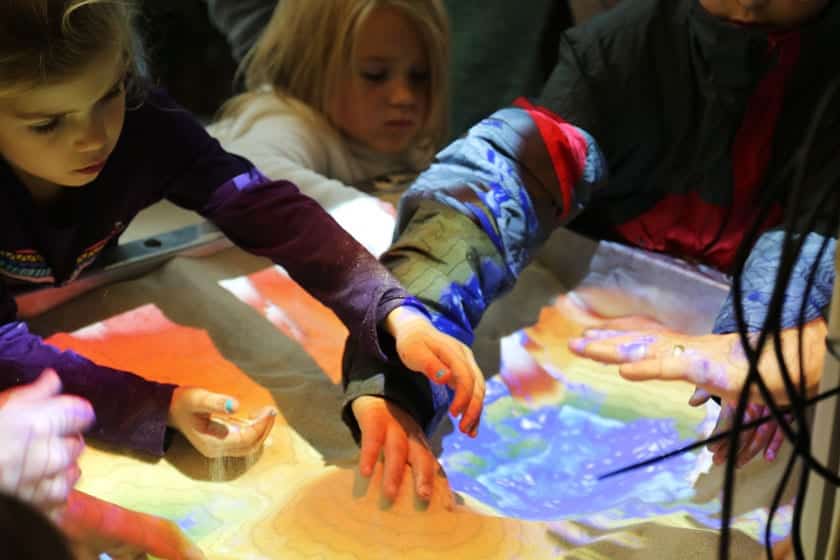 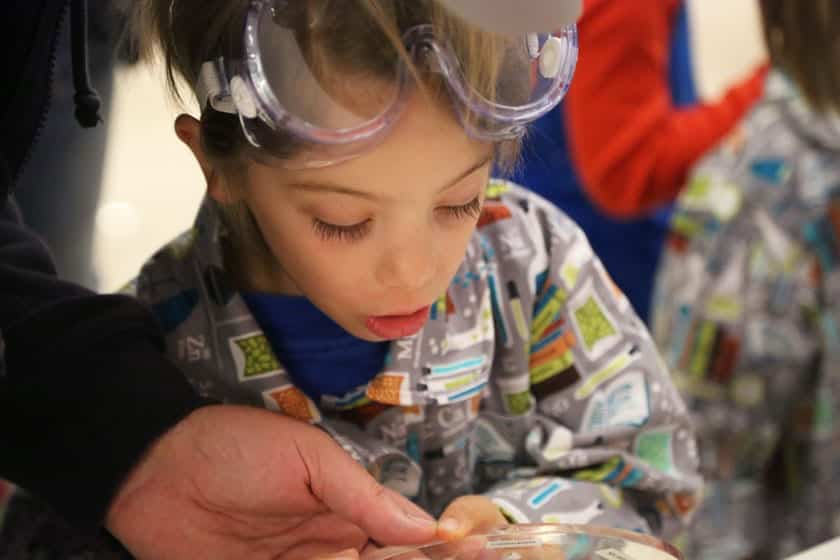 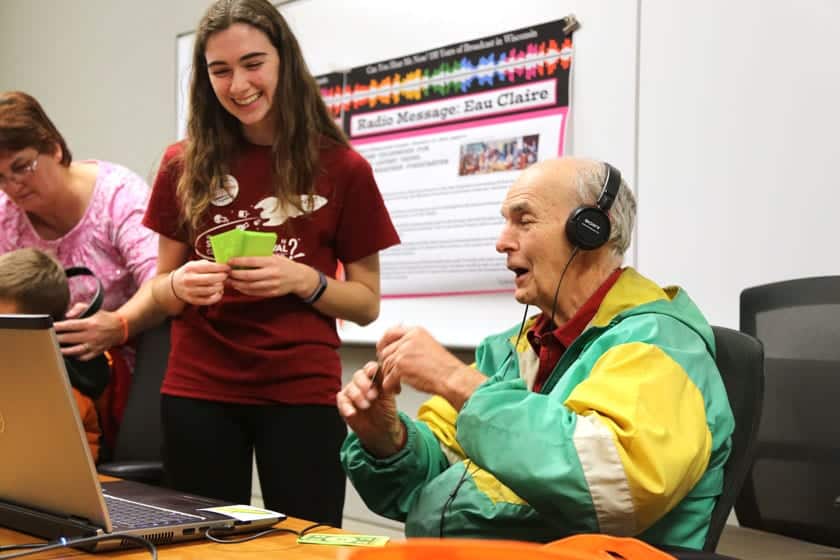 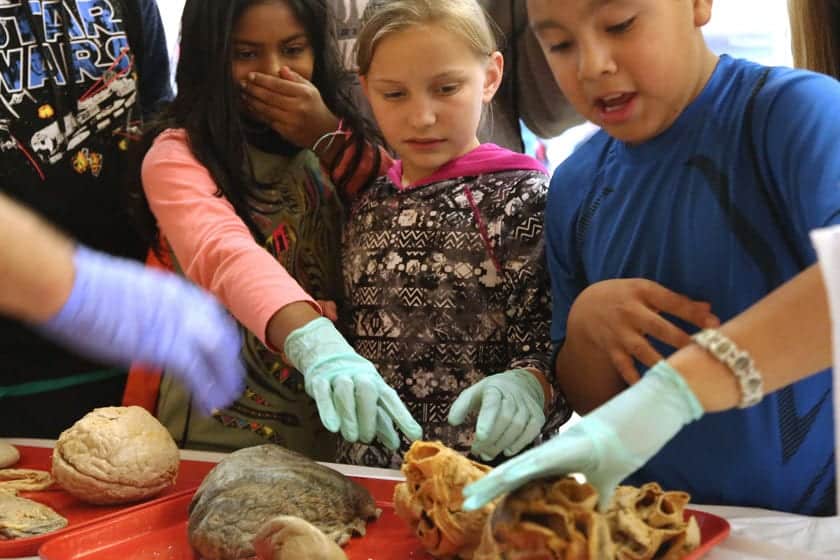 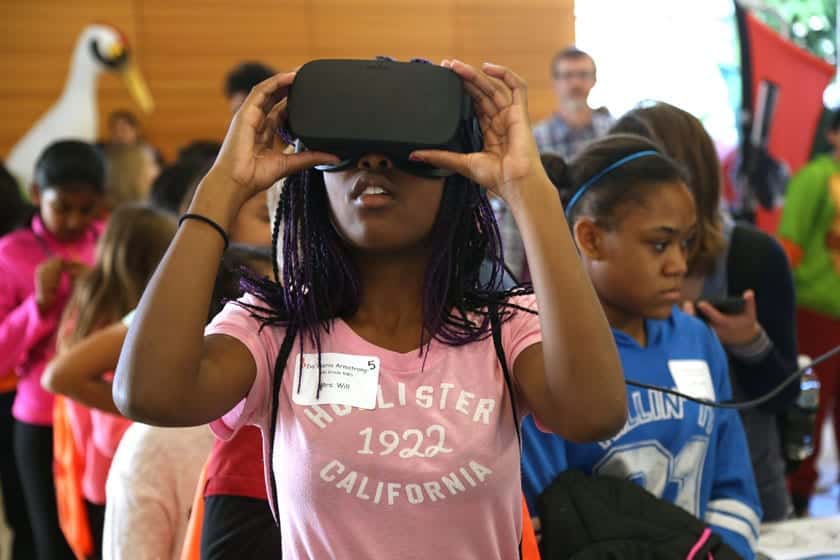 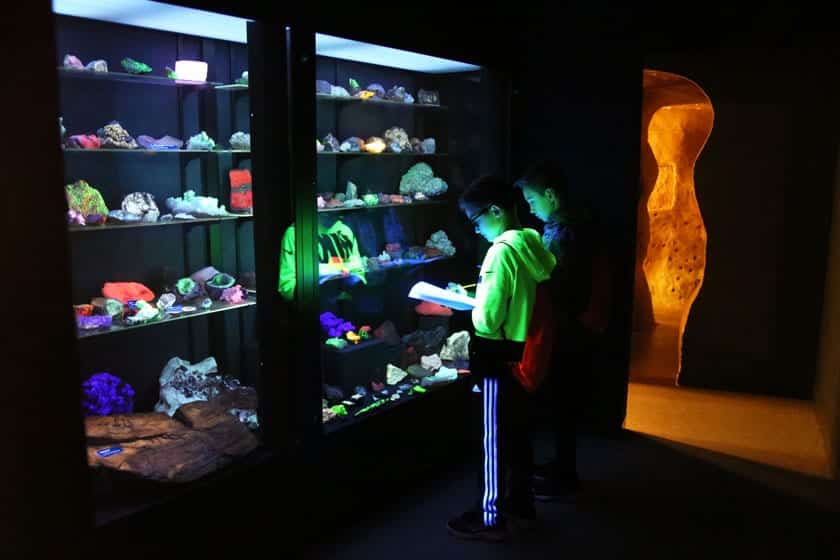 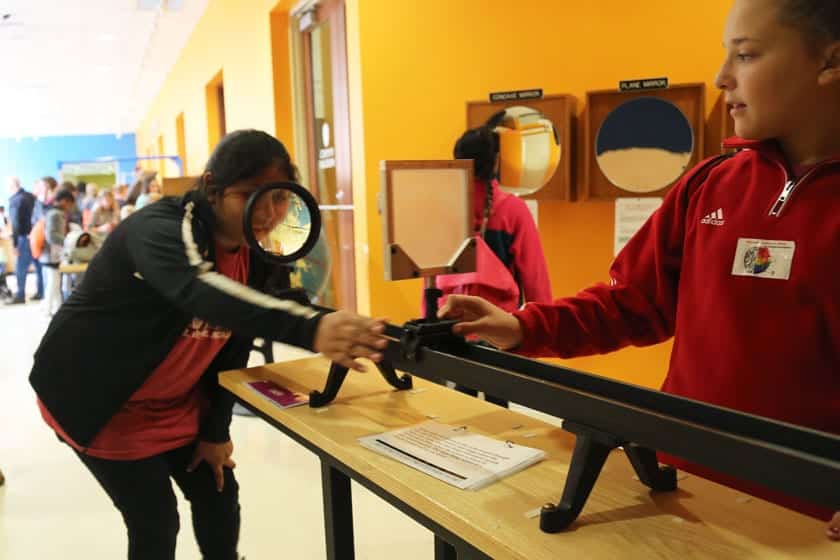 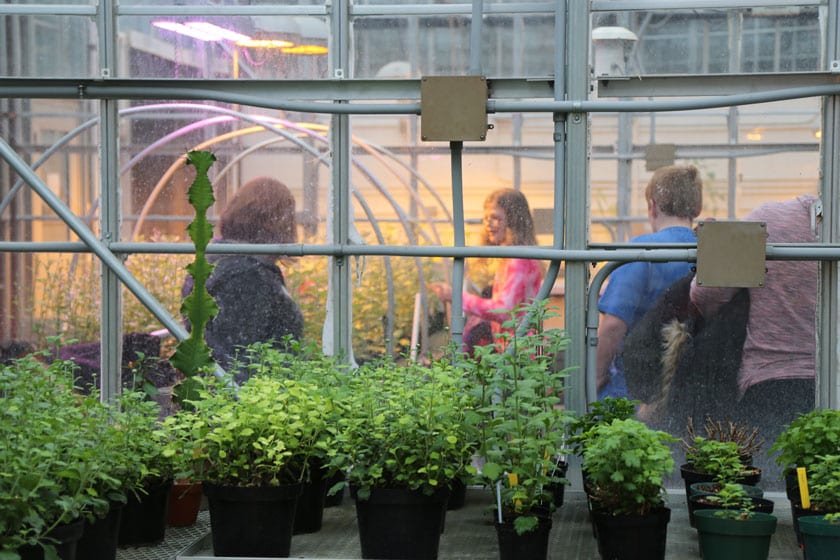 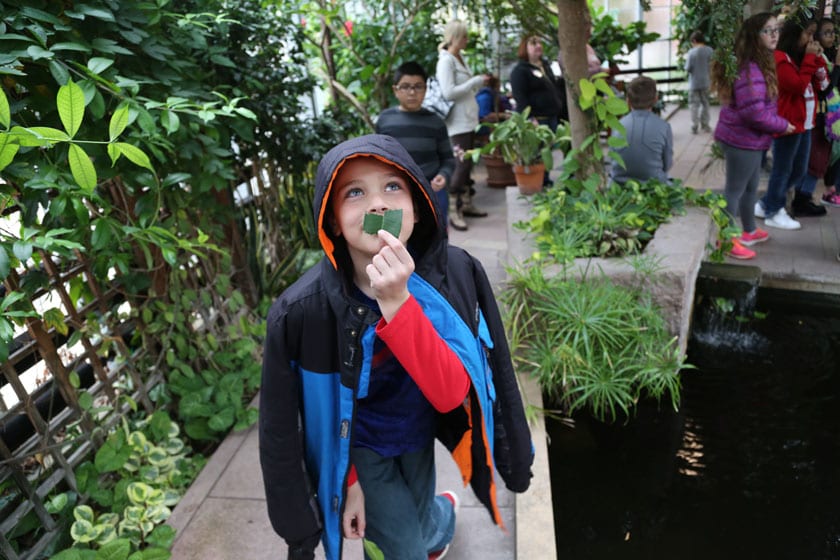 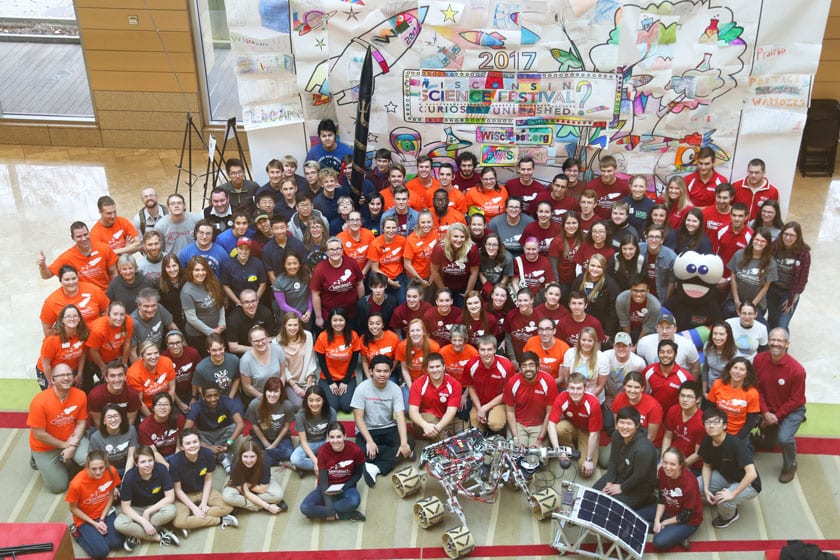