It’s not every day someone gets the chance to stroll through the East Wing of the White House, snapping photos and checking out its famous Blue Room and Red Room. Dave Pagliarini experienced that and more during his trip to the nation’s capital May 5-6 to receive his Presidential Early Career (PECASE) award. 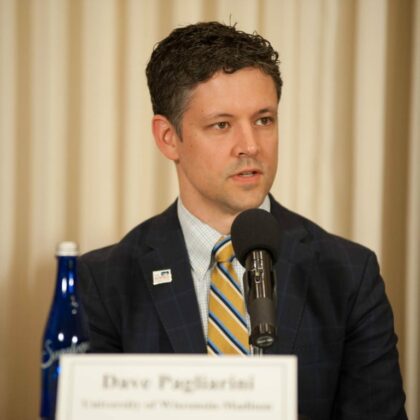 Pagliarini, director of the Morgridge Institute metabolism team and UW-Madison associate professor of biochemistry, and about 40 other U.S. scientists being honored May 6 had some time to get familiar with the iconic residence before meeting President Obama. They received another surprise when President Obama arrived with Amazon CEO Jeff Bezos, a big advocate for science.

Both Obama and Bezos addressed the group, encouraging them to continue making big contributions to U.S. science. “They shook our hands and really took the time to hear who we were and about what we were doing,” says Pagliarini. “It all seemed very real and genuine.”

“The whole PECASE event was pretty special,” he adds. “What really stood out about it was how optimistic and forward-looking it was. You hear so much in science now about problems with funding or rising competition from other countries. This was very much about celebrating what we can do with U.S.-driven scientific research.”

Pagliarini also participated in a roundtable discussion with journalists on May 5 at the National Press Club. The event, sponsored by The Science Coalition, brought journalists together with early-career scientists and engineers from fields such as energy, agriculture, defense and engineering.

The PECASE is the highest honor bestowed by the U.S. government on science and engineering professionals in the early stages of their independent research careers.