News & Stories > What we can learn from hibernation – Q&A with Hannah Carey
This is a featured lab as part of the Metabolism Initiative.

Hannah Carey, a UW-Madison professor of comparative biosciences, uses hibernating mammals as models to study extreme changes in physiology and nutrition that occur on a seasonal basis. Carey discusses this remarkable process and its potential to impact human health by improving trauma care.

Hibernation is remarkable in the fact that animals can “shut down” for a long length of time without any corresponding damage to their vital functions. What biological traits enable the animals to pull off this feat?

Hibernating mammals like our study animal, the 13-lined ground squirrel, undergo circannual (about a year) cycles of food intake, fat deposition, metabolism and body temperature that allow them to survive in seasons when food availability in their habitats is greatly reduced, but the food energy needed to maintain a “normal” high body temperature of 37 °C (99 °F) is very high. To do this, hibernators exert very precise control over their metabolism, which allows them to reduce their metabolic rates to just a few percent of normal summertime values – thus saving large amounts of energy and enabling them to go without food all winter.

This ability to induce metabolic depression, which we call “torpor,” leads to body temperatures of less than 10 °C (50 °F) — similar to that of their surroundings in underground burrows. Interestingly, torpor does not continue uninterrupted throughout the winter; rather, bouts of torpor last from a few days to over two weeks, depending on the point in the winter hibernation season, and in between the animals increase their metabolic rates to very high levels, thus restoring body temperature to levels similar to summer. These “interbout arousals” last for about 12 hours. During interbout arousals, the animals do not emerge above ground; they don’t eat or drink, and actually spend a fair bit of time sleeping. The energy that fuels metabolism during torpor as well as during the massive increases in metabolism needed to initiate arousals comes from the large stores of body fat they have accumulated in the summer and fall, prior to the start of hibernation. Despite much study, scientists do not understand what causes animals to enter torpor, or those that drive the periodic arousals back to normothermia.

Of all species that hibernate, what makes the 13-lined ground squirrel a good fit for your research?

The 13-lined ground squirrel (scientific name, Ictidomys tridecemlineatus), which inhabits the prairie and plains regions of North America, is ideal for hibernation studies because it lives very well in captivity, undergoes cycles of food intake and metabolism similar to what occurs in the wild, and it hibernates very well in specialized “cold rooms” throughout the winter months. In addition, among small mammals that hibernate, the 13-lined ground squirrel’s genome has been most extensively sequenced and annotated, which allows for development of genetic tools to explore their biology, including their ability to exert fine control over their physiological systems.

What elements of hibernation remain a mystery to science?

The greatest mystery of hibernation is why animals must arouse periodically from torpor and return to conditions of high metabolic rate and body temperature. Since much of the body fat that hibernators store is used to fuel these the midwinter returns to normothermia, interbout arousals expend a lot of energy. So why bother to arouse? Apparently, there is a limit as to how long a mammal can survive long-term torpor states. And, we do not yet understand the signals that tell the hibernator it is time to arouse from torpor, or indicate it’s time to return to the torpid state for another bout of metabolic depression.

We also lack detailed information on what drives the endogenous cycles of food intake, weight gain and metabolic fluctuations that occur throughout the year. Apparently, one or more internal cues sense that winter is approaching, enough fat has been stored, and it’s time to hibernate. Amazingly, hibernating species that run on these strong circannual rhythms often try to enter torpor in the fall even if the environment around them is constant. That is, when housed in a typical animal facility in which there are no changes in food/water availability, light/dark cycle, and room temperature, ground squirrels will still voluntarily cease feeding in the fall and start reducing their metabolic rate and body temperature –even if the squirrel was born in captivity and has never been in the wild.

What is your lab working on right now, or will address soon? 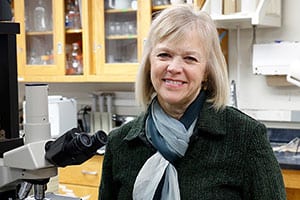 This is fascinating because winter fasting in hibernators eliminates any dietary intake not only for the host animal, but it also removes a major energy source for the gut microbiota. Many studies in non-hibernating animals and humans have now shown that diet is a primary driver of structure and function of the microbiome. Hibernators provide unique insight into how gut microbes respond to the complete absence of dietary nutrients for long periods of time in hosts that remain healthy. This is relevant to clinical conditions in which all or portions of the GI tract are deprived of nutrition for extended periods. To understand the functional significance of seasonally-changing microbiotas for ground squirrels, we work with Fariba Assadi-Porter (Department of Zoology) to use stable isotope-assisted breath and tissue metabolomics to track the products of microbial metabolism within the squirrels’ bodies. Metagenomics studies conducted with our collaborator Garret Suen (Department of Bacteriology) allows us to identify changes in microbiota functionality at the genetic level. These approaches provide key inputs to a systems-based bioinformatics analysis that links metagenome and metabolome features of the shifting hibernator-microbiota symbiosis over the annual hibernation cycle. The long term goal of this research is to integrate the microbiome into hibernation biology and produce new insights that can be applied to other animal-microbial symbioses in which food resources vary over time.

In a new line of research, our team is collaborating with the laboratory of John Denu in the Wisconsin Institutes for Discovery to explore modification of proteins in the mitochondria (electron transport enzymes) and in the nucleus (histones) over the annual hibernation cycle to identify the molecular basis for metabolic and transcriptional control of seasonal and torpor-arousal cycles. These research projects are being led by postdoctoral fellow Rush Dhillon and MD/PhD student Kim Krautkramer.

What are the potential human health implications of your work?

Many of the changes in nutrition and physiology that occur in our subjects from summer to winter, and within the hibernation season, would pose serious risks to the health of species that do not hibernate, including humans. Knowing how mammalian hibernators protect their organs from damage may point to new therapeutic avenues for treatment and prevention of traumatic injury and disease.

One line of research in our lab has focused on how hibernating mammals adapt to long periods of time with no food intake. For most mammals, the intestine is presented with food on a daily basis, and the absence of such “enteral” feeding for long periods can negatively impact the structure and function of the intestine, as well as other organs like the liver. For example, the inner lining of the intestinal wall shrinks when nutrients are absent for more than a few days, and there is a reduction in gut “barrier function,” or the ability to maintain a selective barrier against the trillions of microorganisms and other potential toxins that are normally present in the intestine. In contrast, hibernators are very well adapted to withstand no feeding for months at a time, and although gut barrier function is somewhat reduced, the extent of change does not appear to compromise health of the animals. Our studies are designed to understand how and why hibernators remodel their guts during winter fasting, and to explore how evolution has led to healthy responses to extreme nutritional changes that could compromise health in non-hibernators.

Interestingly, several aspects of the altered relationship hibernators have with their gut microbes are evident in animal models or human patients when the intestine is deprived of enteral nutrients. A good example is total parenteral nutrition (TPN), which is used for patients that require complete bowel rest and provides nutrients intravenously rather than through the GI tract. Although essential for survival for some patients, TPN also can pose serious risks that appear to be linked to changes in the gut microbiome and the intestinal immune system. We think studying hibernators’ immune and microbiota responses to chronic lack of enteral nutrition may help us better understand the health risks of TPN, and possibly lead to ways to reduce those risks.

Hibernating animals also have a remarkable ability to resist the injury that can occur after ischemia — a lack of blood supply to tissues — and when previously ischemic tissues are reperfused with blood. This natural protection may occur because hibernators are normally exposed to transient changes in blood flow to all tissues during torpor-arousal cycles, and they must possess mechanisms that protect their cells from ischemia-reperfusion injury as they enter different hibernation states, or they would not survive.

Indeed, there is evidence that hibernators are vulnerable to ischemia-reperfusion injury during the hibernation season, yet their organs remain highly functional. Our lab and collaborators have confirmed such protection for livers subject to cold ischemia/warm reperfusion, by using an experimental model used to mimic organ cold storage prior to transplantation. We confirmed the same for livers and intestine subject to warm ischemia-reperfusion, as might occur during accidental trauma or surgical procedures.

We have also sought to identify the natural mechanisms involved in this protection, so they could be used in efforts to protect tissues of non-hibernators, including humans, from ischemia-reperfusion events. Our studies thus far point to several potential mechanisms, including reduced activation of cell death pathways, better maintenance of organ blood flow and mitochondrial function, and suppressed inflammatory responses.