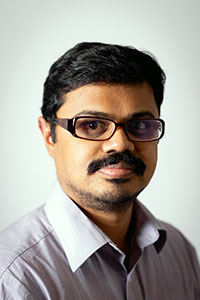 I come from Chennai, one of the southern metropolitan cities of India. I started my career in science with an undergraduate degree in Biotechnology. I spent my summers training in microbiology and plant biotechnology. A major shift came about during my final semester project, when I started work on cancer biology and cell culture at the National center for Biological Sciences in Bengaluru, India, under the mentorship of Dr. Sweta Srivastava. It was there that I first experienced the dopamine boost associated with learning and developed an increased passion and enthusiasm for science. I continued work at NCBS and published on the role of PI3K and Rho-GTPase signaling in cervical cancer growth and metastasis.

I then transitioned literally (from +35°C to -35°C) and figuratively to Canada, where I joined Dr. Savraj Grewal’s lab for my doctoral studies at the University of Calgary, Alberta. I used fruit flies as a model system to establish the role played by dietary nutrients and downstream signaling pathways in the regulation of protein synthesis in growing larvae. I embraced the challenging environment (not the cold) and had the great opportunity to interact with a community of cancer biologists and developmental biologists. I had a great time presenting my work at several local and international meetings, with the added benefit of visits to picturesque Banff.

After a brief career break, I joined Dr. Atanu Duttaroy at Howard University, where I contributed to studying the function of the transcriptional coactivator ‘Spargel’ in Drosophila oogenesis. On October 1, 2022, I joined Dr. Daniela Drummond-Barbosa’s lab, where I am investigating proteomic and metabolic changes associated with germline stem cell self-renewal and differentiation of their daughter cells. In the future, I look forward to combining my scientific interests to study how dietary nutrients affect various tissue stem cells and cancer stem cells.