Baby-boomer demographics offer a frightening look at the future of Alzheimer’s disease.

Without a big advance in early diagnosis and treatment, experts forecast as many as 14 million new Alzheimer’s cases by 2050 occurring among the 78 million baby boomers, the first wave of whom just turned 65. 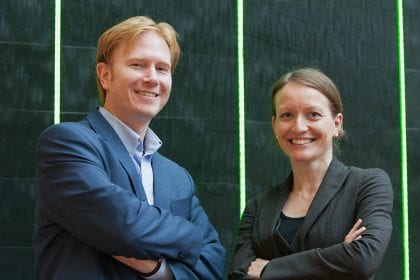 “We are pretty good at diagnosing dementia, but by then it’s too late to help,” says Sterling Johnson, a professor of medicine at the University of Wisconsin-Madison. Johnson is part of a large team at UW-Madison working to find the early signatures, or phenotypes, of Alzheimer’s to help better predict who will get the disease — and ultimately delay or halt dementia.

“The idea of predictive phenotyping is really critical for this disease,” says Johnson. “If we could catch Alzheimer’s early and postpone it even by 10 years, those 14 million cases we are projecting could be reduced to 3.5 million cases – a 75 percent reduction.”

One of the keys to this high-stakes health threat will be the big data revolution in healthcare. UW-Madison is home to the Center for Predictive Computational Phenotyping (CPCP), one of 11 National Institutes of Health (NIH) centers of excellence in big data. Johnson was among about two-dozen UW-Madison scientists presenting their research during CPCP’s first annual retreat in June at the Discovery Building.

CPCP is a partnership between UW-Madison, the Marshfield Clinic Research Foundation and the Morgridge Institute for Research.

Johnson’s work is focused on brain imaging data from two large study groups — the Wisconsin Registry for Alzheimer’s Prevention and the Wisconsin Alzheimer’s Disease Research Center’s Impact cohort, collectively more than 2,500 subjects. He is tracking, across groups with and without the disease, two of the hallmark features of Alzheimer’s, the neurofibrillary tangles inside the neuron and amyloid plaques outside the neuron.

One advantage to scientists is that these features show up in the brain years before people experience any cognitive decline from Alzheimer’s. The disadvantage, however, is that most people who exhibit these features do not ultimately develop the disease. Johnson’s goal is to identify the early, subtle differences that can separate out those with the highest risk profile.

Essential to this work is Vikas Singh, professor of biostatistics and medical informatics (BMI), who has developed a sophisticated multi-resolution brain connectivity analysis algorithm based on the theory of wavelets. Through this approach, which draws data from thousands of different images and different modalities, they are able to assign a score to individual brain images that accurately predict future cognitive decline. Graduate student Won Hwa Kim also contributed to the work, which is highlighted in the September 2015 issue of the journal NeuroImage.

“And we’re predicting it in people who have mild cognitive impairment rather than full-blown Alzheimer’s,” says Johnson.

This finding gets the medical community closer to a preventive clinical trial, Johnson says. Measuring cognitive changes and risk factors alone will not provide enough clues to be predictive. The computational work is helping “identify the disease itself.”

“Brain images are much less noisy and they tell us what we need to know without all the variability,” he says. “If we can organize a clinical trial using the approach we’re refining now, we could reduce the number of subjects needed from 2,000 to 500. That changes it from a $100 million study to about $2 million, something in the ballpark of NIH.”

The team uses the Center for High Throughput Computing (CHTC), supported by UW-Madison and the Morgridge Institue, to segment MRI brain images that in some cases can take 12-24 hours for a single brain. “For many hundreds of brain scans, we need a high throughput solution and the CHTC has been and will be an important part of our work flow,” Johnson says.

Barbara Bendlin, UW-Madison assistant professor of medicine, is addressing many of the same challenges as Johnson, but focusing on different areas of the brain affected by Alzheimer’s. Bendlin looks at brain white matter, a region that supports the transmission of nerve signals across different brain centers.

Scientists are finding reduced function in this central wiring system among people with Alzheimer’s. Bendlin has found that these white matter changes, much like the plaques and tangles studied by Johnson, are evident very early, even in people in their forties, making it another potential marker for prevention strategies.

With help from the Singh Lab “dream team,” Bendlin was able to take her work much further, looking at what connections and what brain regions are most affected by Alzheimer’s. Using conventional approaches, Bendlin’s team identified eight connections that appear most affected by Alzheimer’s. Then, using Singh’s multi-resolution wavelet analysis, they identified 81 connectivity differences.

“There will be more important clues to Alzheimer’s early stages coming from these connectivity studies,” Bendlin predicts.

The ultimate goal will be to create detailed maps of the human brain “connectome,” a road map of all brain connections. So far, only one organism – the small worm C. elegans – has a fully mapped connectome, and it took scientists 12 years to map 302 nerve cells and 7,000 connections.

“In humans we have approximately 86 billion neurons and a minimum of 100 trillion connections — not a trivial problem,” she says.

Ultimately, all of these different markers, measured across all types of brain imaging, will need to be combined with genetic risk factors and environmental factors to develop a true picture of early risk. Bendlin says the biggest challenge is using all of this data to narrow down the most likely candidates for early intervention.

She notes that in autopsy studies, 40 percent of individuals have all the pathologies evident to be diagnosed with Alzheimer’s, but showed no mental impairment in life. “That’s why this is such a difficult disease to study.” 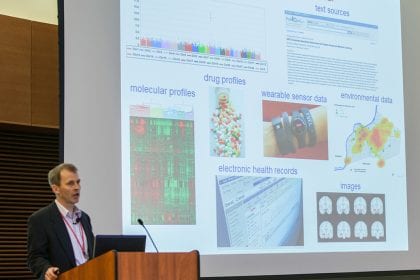 Mark Craven, BMI professor and director of CPCP, says deciphering big data “has the potential to transform our understanding of biology.” It likely will lead to better methods for diagnosis, prognosis and early screening for disease. “But this data is underexploited. This effort is focusing on transforming this data into better tools to predict disease.”

The amount of information available to medicine is staggering, approaching an impossible-sounding metric called the “zettabyte,” or one sextillion bytes of information. Craven says the data include historic patient records, molecular and genetic profiles, wearable sensors, medical images and even social media. One off-campus study is using Twitter usage patterns in a group suffering from insomnia.

Robert Golden, dean of the School of Medicine and Public Health, says this project might be the perfect bridge between the school’s clinical and population health missions. Adding Marshfield Clinic and the Morgridge Institute constitutes a “triple threat.”

“This type of data science is going to be critically important as we push forward biomedical science that not only affect individuals, but entire populations,” Golden says.

Alzheimer’s is just one of the diseases being explored in CPCP, as well as new platforms and strategies for exploiting big data. For more, check out three short videos providing different takes on the work, including BMI Professor David Page on machine learning, radiology Professor Elizabeth Burnside on breast cancer, and Craven on predictive phenotyping.