An invention designed to transform how and where high-powered research microscopes are deployed — and who gets to use them — will make its way from Madison this spring to the fertile biology labs of greater Boston. 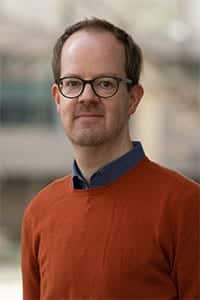 A portable, shareable scientific microscope nicknamed Flamingo, created in 2018 by imaging pioneer Jan Huisken of the Morgridge Institute for Research at the University of Wisconsin-Madison, will make its cross-country journey thanks to support announced today (March 19) by the Chan Zuckerberg Initiative (CZI).

Created in 2015 by Priscilla Chan and Mark Zuckerberg, CZI’s mission is to find new ways to leverage technology, community-driven solutions, and collaboration to accelerate progress in science, education, and its justice and opportunity work.

Huisken’s vision is to redesign a high-end optical microscope — normally big enough to fill an entire room — down to the dimensions of a suitcase, with minimal loss of power or precision. It’s capable of being shipped to interested research partners in a lab or in the field, configured to meet specific needs, then shipped on to the next bright idea.

The roughly $1 million CZI grant will support a Morgridge Institute scientist embedded for five years in the Boston area, making connections with biologists at Harvard University, the Massachusetts Institute of Technology, and other nearby research centers. Michael Weber has been hired as the project’s field application specialist in Boston.

“We’re turning the idea of a research imaging facility upside down,” says Weber. “We want to bring the microscope as close to the sample as possible, rather than biologists bringing their delicate samples to us.”

These three images show the cardiovascular system of a living, 4-day-old zebrafish. In the middle image, the vasculature is highlighted in blue, while red blood cells and heart muscle are depicted in red. The fish is about 5 millimeters long and the heart is about 200 micrometers (akin to a thick human hair).

Scientists study animals like zebrafish—a tropical fish sporting horizontal blue stripes—to learn about human diseases. “I love being able to record and study the behavior and function of living organisms under physiological conditions—without harming them, and without them realizing that they’re being observed.” —Michael Weber, Morgridge Institute for Research.

Huisken, visiting professor of UW-Madison integrative biology, says the new approach could bring transformative benefits to the study of basic biology. The Flamingo Project will allow scientists to do studies on living organisms without disturbing the specimen, or do studies right in their native environments. It also may help democratize expensive high-end microscopy, bringing it cost-free to campuses and labs where access may be scarce.

“We think this will be especially useful for reproducing scientific results, something increasingly important to science,” Huisken says. “When anyone publishes a paper that used Flamingo to produce data, another scientist can request a Flamingo and reproduce that same project.”

Huisken is co-inventor of light sheet microscopy, in which a thin laser light sheet selectively illuminates samples in 3D, giving scientists the ability to image samples over hours or days from every angle. This generates a tremendous amount of data quickly and gives researchers a view of embryonic development without harming the specimen. Flamingo brings this technology in a compact frame.

It’s a widely used technology for those who study zebrafish, a model organism that provides a spectacular window into early embryonic development. Scientists can see the earliest formations of organs and even follow cell-by-cell development. Vertebrate model organisms like zebrafish are critical to helping understand human development.

Huisken says he hopes Flamingo access also will open imaging opportunities to new species. For example, it could be deployed to marine biology labs that study rare aquatic life, or to a lab studying a local endangered species. Any relatively small critter could be a candidate. 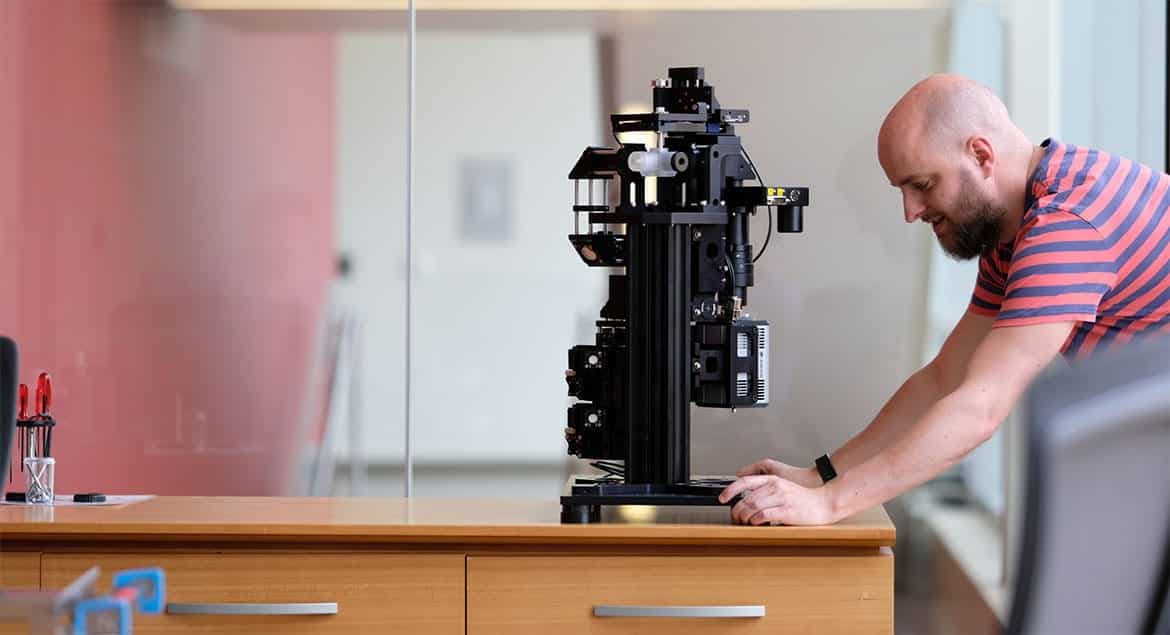 Postdoctoral Fellow Rory Power inspects the completed microscope, which at a little over 40 pounds can be mailed to biology labs around the globe. Photo by Jan Huisken

“I love being able to record and study the behavior and function of living organisms — without harming them and without them realizing that they’re being observed,” adds Weber, who before joining Flamingo was a postdoc in Harvard’s Nikon Imaging Center.

The Boston partnership will help establish proof of concept for the traveling microscope, where Huisken hopes for a mix of easy imaging tasks to “projects where we have no idea if it’s going to work.”

Huisken says they hope to later make increasing access part of the selection process. “I’d like someone from a small college to email me and say, ‘I have this crazy idea, what do you think?’ We get them an instrument and they start doing science they could never otherwise do.”

Huisken also sees potential in deploying Flamingo as a research education tool. He notes the Marine Biological Laboratory at nearby Woods Hole, Mass., and the Cold Spring Harbor Laboratory in New York, train hundreds of graduate students and postdocs annually in advanced research methods. Flamingo would be right at home in such a world, he says.

While the Huisken lab current has one operational Flamingo, the plan is to build multiple microscopes to expand their use base. The team may also partner with overseas physics labs who could build and distribute Flamingoes in their countries. The lab has ongoing fundraising efforts to support the project.