In the fight against the viruses that invade everyday life, seeing and understanding the battleground is essential. Scientists at the Morgridge Institute for Research have, for the first time, imaged molecular structures vital to how a major class of viruses replicates within infected cells.

“The challenge is a bit like being a car mechanic and not being able to see the engine or how it’s put together in detail,” says Paul Ahlquist, director of virology at the Morgridge Institute and professor of oncology and molecular virology at the University of Wisconsin-Madison. “This work is our first look at the engine.”

One of several goals in the Ahlquist Lab is to understand genome replication for positive strand RNA viruses, the largest genetic class of viruses that includes many human pathogens such as the Zika, Dengue, SARS, and Chikungunya viruses. The group studies processes in a strategic way, focusing not on the fine details of a single important virus, but on large principles that apply to the whole class.

And why the focus on genome replication?

“The majority of the virus genome, typically on the order of 75 percent, is given over to genome replication,” Ahlquist says. “The virus is telling us—by voting with its most precious resource, its coding capacity—that this is the big job of infection.”

This process happens to occur on membranes in an infected cell. The viruses make replication compartments—essentially new organelles—in which the genome replication process takes place. The nodavirus used as a model in the Ahlquist lab carries out this process on the mitochondrial membrane.

An uninfected mitochondrion has two membranes around its exterior. In a mitochondrion infected with the virus, the space between those membranes is expanded and filled up with spherules, round vesicles about 50 nanometers in size.

Desiree Benefield, a postdoctoral researcher in the Ahlquist Lab at the Morgridge Institute, says all positive strand RNA viruses rely on host membrane rearrangement and the formation of replication compartments in order to copy their genome. This makes an attractive target for broad-spectrum antivirals, drugs that are effective across a wide range of viruses.

“With this exciting new structural information we can learn more about how the compartments are formed and function,” Benefield says. “This information will contribute to our understanding of viral replication and provide insight on how to control it.”

The replication compartments, or spherules, contain strands of RNA, the genetic code of the virus. It’s in these spherules that RNA synthesis takes place. The product RNAs are then expelled from the spherule and used to make more proteins, or get packaged into new infectious particles to make the next generation of viruses. 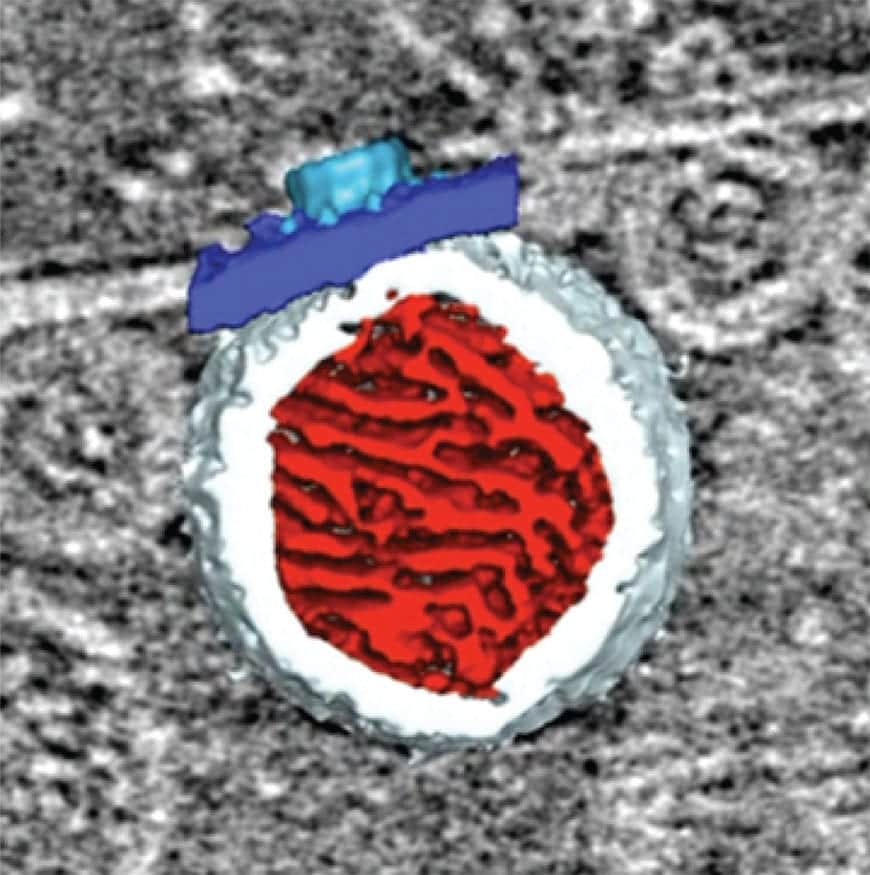 Pictured is a three-dimensional rendering of a virus RNA replication spherule. The mitochondrial outer membrane is in dark blue, the spherule membrane in white, the interior spherule RNA density in red, and the spherule crown aperture in light blue.

The new use of cryo-electron tomography (cryo-ET) has allowed the scientists to see replication compartments in unprecedented detail, says Benefield.

“We are able to see structural elements that were previously only inferred from biochemical and genetic experiments, as well as striking new features that were never imagined.”

Traditional electron microscopy has its limitations and requires a series of steps that are harsh on the sample: chemical fixation, heavy metal staining, and embedding in plastic. The process is slow, using highly reactive and dangerous chemicals, and the sample is fixed, and therefore imaged, in an unnatural state.

Sample preparation for cryo-ET is simpler and produces better results. The sample is flash frozen in a nanosecond into liquid ethane, cooled with liquid nitrogen. Because it’s frozen so quickly, the sample is trapped in a much more native state. There’s also no time for the water molecules to organize and crystallize, so the ice is vitreous, glassy.

Using traditional electron microscopy, the replication compartments looked elongated, almost football-shaped. The fixation technique had shrunk the spherules, and their contents shriveled up. Cryo-ET shows the reality—the structures are quite round, meaning they’re under pressure like a balloon, and filled with RNA strands wrapped like a ball of yarn. The size of the spherules varies based on the length of the RNA that’s being copied.

This video shows a three-dimensional rendering of a virus RNA replication spherule from multiple angles. The mitochondrial outer membrane is in dark blue, the spherule membrane in white, the interior spherule RNA density in red, and the spherule crown aperture in light blue.

“I was first struck by how beautiful and graceful the structures were,” Benefield says. “I was amazed by how efficient the virus is at replicating its RNA and how it completely co-opted the host cell mitochondria to eventually produce more virus. It was a peek behind the curtain of a pathogen at work that was truly humbling.”

The spherules have a neck along the mitochondrial membrane that opens up into the cytoplasm. It’s here that the ingredients for replicating RNA go in, and the products come out. One surprising finding was the existence of a crown-like structure that sits on top of the neck.

The structure is a highly organized, highly symmetrical cup with 12 teeth around the outside. It’s a structural feature that likely holds everything together. If the vesicle is a round balloon under pressure, the crown is like tying off the neck of that balloon.

The new results further show that the crowns contain the viral proteins that read and copy the RNA strands, and may represent the major engine of the genome replication complex. There’s much more work to be done to refine the form and function of these crowns, but revealing their existence and imaging their structure and symmetry are huge steps in the right direction.

“If we want to manipulate and control these complexes, we have to understand their detailed operation” Ahlquist says. “You can’t understand how something functions if you don’t know what it looks like and how it’s put together.”

The positive RNA strand viruses are just one of six different classes of viruses, Ahlquist says. It’s becoming more apparent that the formation of replication compartments, and perhaps even crown-related structures, may be shared by more than one class.

“Although these classes have been seen as very different, there are parallels in three of the six classes in terms of genome replication,” Ahlquist says. “This has evolutionary implications and allows us to integrate results from different systems to reach unexpected new insights.”