Organ transplantation has come a long way from its early days in the mid-twentieth century. But even with major medical advances, there’s still an admittedly familiar factor at play: ice.

Just prior to transplantation, an organ is reconstructed and prepared in the sterile operating room during what is known as the “backbench procedure.” As surgeons prepare the organ, it stays cooled and preserved in a hypothermic state in a basin on a bed of sterile ice.

But ice is a pretty rudimentary technology – it melts, exposing the organ to the environment including powerful overhead lights. 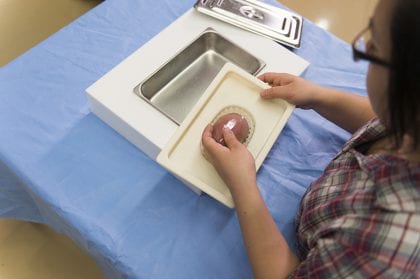 “It’s not a very sophisticated or controlled process,” says Dr. Dixon Kaufman, chair of transplantation in the University of Wisconsin-Madison School of Medicine and Public Health (SMPH). “There’s no way currently to regulate the temperature of an organ during the backbench procedure – there’s no quality control or monitoring.”

That challenge led Kaufman and a colleague to the Fab Lab at the Morgridge Institute for Research, via a collaboration with the Biomedical Engineering (BME) Design Program at UW-Madison. From a creative process – which included etchings on the back of a napkin – came the idea for the Organ Cooler Project, a design primarily built by UW-Madison student engineers Reed Bjork, Monse Calixto, Alex Craig, and Annie Yang. The system was built under the guidance and mentorship of senior staff engineers Robert Swader and George Petry in the Morgridge Fab Lab.

When the BerbeeWalsh Prototype Pathway—an effort that connects physicians with engineers to address challenges in medical technologies — launched at Morgridge in fall 2015, the organ cooler idea became a perfect fit for the pathway’s mission.

“Nothing like this has ever been done before,” Kaufman says.

Notably, the project emerges from the same university that invented the “Wisconsin Solution,” a landmark cold-storage solution used worldwide in transplant medicine. Dr. Folkert Belzer and James Southard developed the technology at SMPH in the 1980s.

Due to its ability to precisely control temperature, the technology could apply to new advances in organ preservation, including techniques that preserve organs at body temperature. UW Hospital became the first hospital in the country this year to use a new “warm perfusion” technology, which may keep organs healthier longer.

Throughout the process, students have played an integral role – including Anneka Littler and Annie Yang, both seniors majoring in biomedical engineering who have been developing the latest iterations of the prototype under support of the BerbeeWalsh Prototype Pathway.

“Not many students can say that they got the opportunity to design, develop, and build a medical device,” Yang says. “You not only learn a lot about the respective medical field but about yourself along the way.”

For Yang, the organ cooler has given her the opportunity to take classroom knowledge and apply it to real-life problems. She’s worked alongside talented designers and engineers, top clinicians, and fellow students.

“I love the collaborative nature,” she says. “I’ve learned that if you have an idea solving a legitimate problem, just run with it. The idea and your passion will attract people and collaborators.” 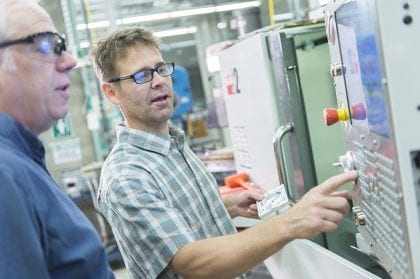 Collaboration, mixed with passion and energy, are part of the project’s success. Kaufman points to the interactions of surgeons, engineers and students, and the tenacity among all to solve problems.

“It’s been a fantastic, mutually rewarding and instructive experience,” he says. “This is the perfect example of how innovation emerges from the intersection of two diverse areas of interest when they collaborate together.”

The prototype pathway at the Fab Lab is made possible by a gift from the BerbeeWalsh Foundation, created by UW-Madison emergency medicine Professor Dr. James Berbee and his wife Karen Walsh. The couple created the pathway to build a strong connection between front-line physicians who encounter medical technology challenges and the engineers and students who can solve them.

Berbee, the founder of Madison-based Berbee Information Networks, is a member of the Morgridge Institute Board of Trustees.