Survival rates remain bleak for pancreatic cancer, which kills more than 90 percent of people within the first five years of diagnosis.

“It is the most lethal cancer because we have no really effective way to treat it,” says Melissa Skala, a principal investigator in medical engineering at the Morgridge Institute for Research.

Skala and Paul Campagnola, a professor of biomedical engineering at UW-Madison, hope to make inroads toward improved drug therapies through a two-year National Institutes of Health Exploratory/Developmental Research Grant. 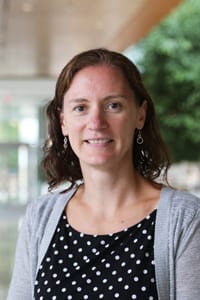 They plan to use Campagnola’s novel imaging and micropatterning techniques to create a 3D model of pancreatic ductal adenocarcinoma, which will improve their ability to identify effective drugs.

Current testing relies either on mouse models, which don’t match the human disease in aggressiveness or the start of tumor development, or on two dimensional cultures that generally fail to account for interactions between cancer cells and those in the stroma, the tumor’s hefty supportive tissue. That’s a key missing ingredient, because the stroma protects the cancer cells from drugs while also encouraging tumor growth.

To build their model, the engineers will take high-resolution images of cancerous tissue using second-harmonic generation microscopy, then print small-scale 3D replicas of the tissue’s extracellular matrix, part of the stroma that creates structure. By bringing together cancer cells and support cells in that realistic environment, they’ll see how the cancer cells move, divide and produce energy— and which drugs stop them.