Path to Better Health Safeguarding the most vulnerable patients

Pediatric anesthesia is a stressful and critical procedure. Dr. Bilen-Rosas wants to help clinicians recognize dangerous sedation pathologies sooner. She teamed up with the Morgridge Fab Lab to create a new medical device that alerts clinicians to compromised airways.

The Fab Lab provides extensive R&D space with unmatched capabilities in rapid prototyping and complex fabrication for researchers at UW-Madison.

As a pediatric anesthesiologist, I have long been concerned by how difficult it is to detect breathing problems among young patients during anesthesia. We are trusted by parents to protect the love of their lives, a healthy baby, and we’re administering very potent medications. It doesn’t matter how many years you’re trained, it is really a high-risk situation and a lot can go wrong. It was these concerns that led me to the groundbreaking engineering design work being done at the Morgridge Institute for Research Fab Lab led by institute investigator Kevin Eliceiri.

Anesthetics or sedatives slowly degrade a patient’s ability to protect their breathing. Slowly, structures in the airway start collapsing. The tongue can fall back. Conditions like laryngospasm, the sustained closing of the vocal cords, can impair breathing. Those changes, as we administer anesthesia, are not very easily detected, and they can develop quickly.

These problems are difficult to teach to prospective anesthesiologists, especially in pediatric patients who are being anesthetized with inhalation agents. During this very delicate period, breathing troubles can be subtle, and different, and there is never a good way for me to instruct trainees quantitively about when a patient is reaching a critical point and when early interventions are needed. This is particularly true for children, who by nature of their physiology, are especially susceptible to developing airway changes quickly. Children also have lower levels of respiratory reserves—this makes timely recognition imperative to initiate rescue maneuvers.

I thought maybe there would be something, some device out on the market, like a real-time monitor that would alert us if a patient was deteriorating. But to my surprise, no such device existed.

That led me to the BerbeeWalsh Prototype Pathway and the Fab Lab at the Morgridge Institute. I had a vision of what the clinical device would be, but that idea has evolved so much over the years working with talented engineering students and staff engineers such as Robert Swader, George Petry, and Ben Cox.

Our first prototype we dubbed ROAM (Respiratory Obstruction Airway Monitor) and was developed by the biomedical engineering students, who are an amazing group. It was big and clunky. It really looked like a brick.

Over several semesters with input and design expertise from the Fab Lab, we made improvements in the algorithms and interfaces needed to make it work. The machine also has become smaller and sleeker. We now have a touchscreen panel. For the first time, we have a machine that tells us: “Now is the time to intervene. Now is the time to do the measures needed to start troubleshooting.” ROAM detects a critical threshold when the patient’s breathing goes below safe levels. The device sends audible or visual alarms to the anesthesiologist.

“The Morgridge Institute is a little island of hope.”

Related to the same clinical problem addressing respiratory deterioration across all patients, my lab is separately developing a novel methodology using ultrasound signaling. I am excited for what’s next. We’ve entered the second phase of our ultrasound project with support from the WARF Accelerator Program. Creation of phantom models for our bench test by the Fab Lab has substantially contributed to the collection of important ultrasound data, which was presented for the Phase 2 Accelerator Program Funding.

Pediatric anesthesia is a stressful and critical procedure. Dr. Bilen-Rosas wants to help clinicians recognize dangerous sedation pathologies sooner. She teamed up with the Morgridge Fab Lab to create a new medical device that alerts clinicians to compromised airways.

The Fab Lab provides extensive R&D space with unmatched capabilities in rapid prototyping and complex fabrication for researchers at UW-Madison. 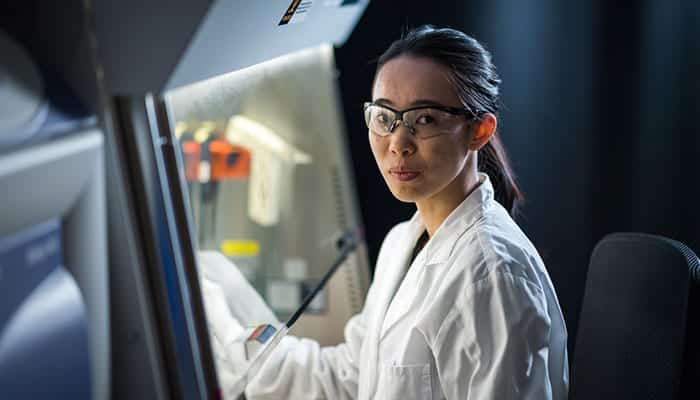 The series explores the tremendous stakes involved in biomedical research and why a fundamental understanding of biology is needed to improve human health. Learn more about the challenges of predicting preterm births, developing protections against viruses, fighting a devastating tropical disease, and keeping babies safe under anesthesia.