Forward-thinking science and childhood memories came full circle on Wednesday for U.S. Sen. Tammy Baldwin, who visited a lab at the Morgridge Institute for Research that is carrying on the inspired legacy of her grandfather, David E. Green.

Baldwin, who was raised by her grandparents in Madison, spent many days visiting her grandfather’s lab just a few blocks away from the Morgridge Institute, at the University of Wisconsin-Madison Enzyme Institute. Green was recruited from Columbia University in 1948 to be the original director of the Enzyme Institute and he led the program through the golden years of metabolism science, where one fundamental discovery after another was coming out of UW-Madison.

Commonly referred to as the “chemistry of life,” metabolism is the process by which the body uses food and oxygen to produce the energy and chemicals needed for essential functions and processes that constitute life. The work of Green’s team in the 50s and 60s produced seminal discoveries about the function of the mitochondria and the molecule coenzyme Q, both essential players in healthy metabolism.

Today, metabolism research at UW-Madison is stronger than ever, and Baldwin took the opportunity to tour the lab of one of her grandfather’s scientific successors: Dave Pagliarini, a Morgridge metabolism investigator and UW-Madison professor of biochemistry.

“There’s a lot of talk in the culinary community about locally sourced ingredients,” Pagliarini says. “This is locally sourced science. The fact that we’re building upon discoveries made just down the road, is very motivating and meaningful to us.”

Pagliarini described the core focus areas of his lab. About one fourth of all proteins in the mitochondria are still unknown in function. This leads to significant gaps in our knowledge of mitochondrial disease, which includes more than 150 disorders that frequently impact children. Unfortunately, there are no FDA-approved drugs to treat these diseases.

In the 1950s, Green was using one of UW-Madison’s first electron microscopes, but the technology today opens up entirely new capabilities that generation couldn’t have dreamed of. For example, Pagliarini is using CRISPR gene editing technology to disrupt different genes, then apply tools like mass spectrometry and cryo-electron microscopy to determine exactly what function those genes are tied to.

Baldwin says the visit brought back “warm memories.” One she described was the six-mile walks her grandfather would take for workday exercise. “When I had a chance to come with him, he was always thinking about the next experiment or talking about what he had discovered. That sort of rigor and commitment to a calling, a quest, is something that rubbed off on me quite a bit.”

“This is super special because of the story of my grandfather’s contribution to what is happening here in the lab right now.”

“In any instance I would get excited about a chance to see some of the incredible cutting-edge research that is going on at UW-Madison,” Baldwin says. “This is super special because of the story of my grandfather’s contribution to what is happening here in the lab right now.”

As a small child, Baldwin says she couldn’t grasp the work he was doing, but clearly saw his dedication to understanding the human body and the “search for truth.” Then as a teenager, she would have long conversations with him about the science and luminaries would frequently visit, such as Hans Krebs, discoverer of the so-called Krebs Cycle, a sequence of chemical reactions cells use to create energy.

“He came over to our house for dinner,” she says.  “The Krebs Cycle guy, right? I was learning about his work in school.” 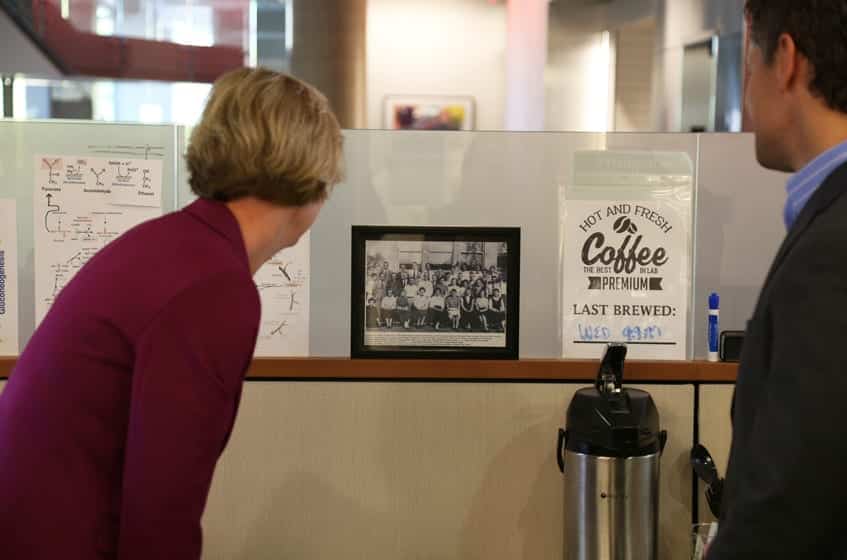 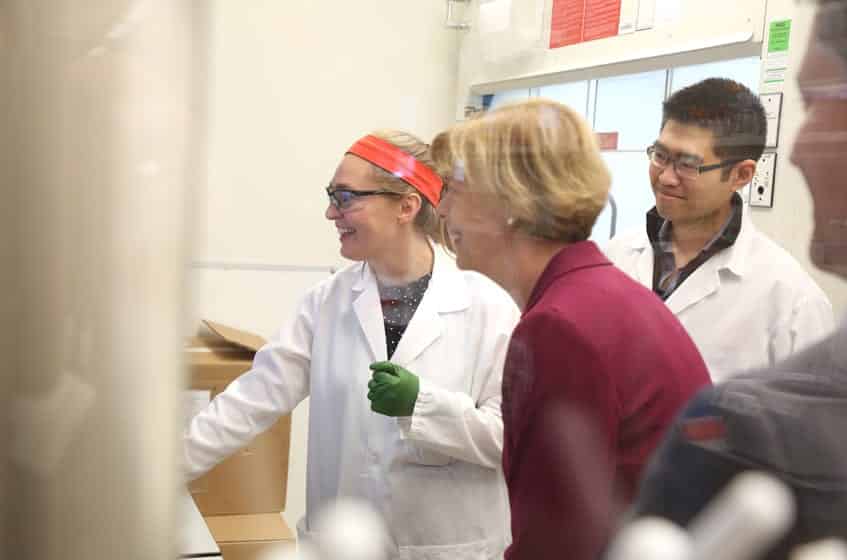 Laura Steenberge and Andrew Sung, graduate students in the Pagliarini Lab at Morgridge, show Baldwin a current experiment they're running in relation to the metabolism research done in the lab. 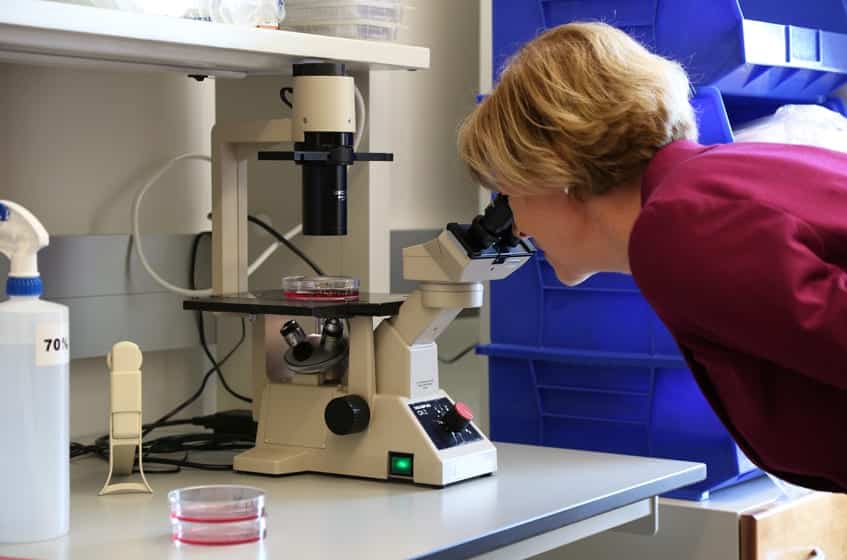 Baldwin examines kidney cells under a microscope during a visit to the Pagliarini Lab at the Morgridge Institute. 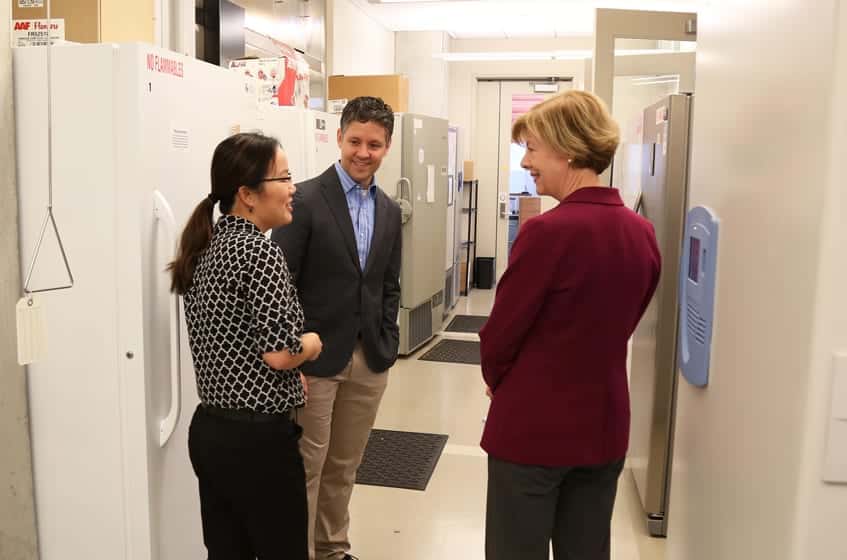 Jing Fan (left), an investigator in metabolism at Morgridge, with Dave Pagliarini (center), discusses how she integrates metabolomics and lipidomics approaches with biochemical, genetic, and computational tools to investigate metabolism. 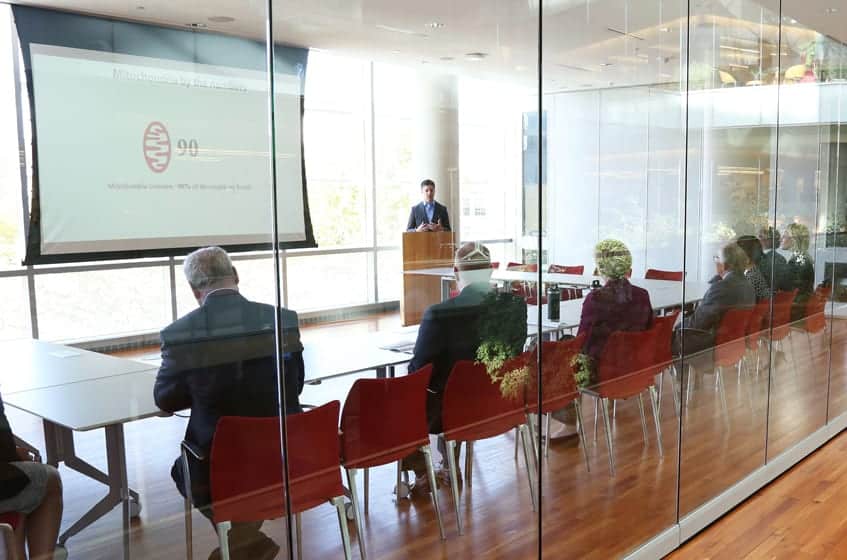 Dave Pagliarini, an investigator in metabolism at the Morgridge Institute and associate professor of biochemistry at UW-Madison, discusses his lab's work on mitochondria and coenzymeQ.