Human T cells are promising weapons for fighting cancer, but not all T cells are created equal. A team at the Morgridge Institute for Research has found a better way to recruit the fittest candidates for the job. 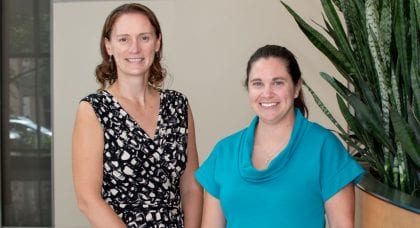 Alexandra Walsh, an assistant scientist in the lab of Morgridge medical engineer Melissa Skala, is leading a project to use non-invasive fluorescence imaging to identify and sort T cells for use in cancer immunotherapy treatments. The technology on Oct. 17 won a 2018 Innovation Award from the Wisconsin Alumni Research Foundation, which recognizes the year’s most outstanding inventions.

T cells are specialized immune system cells designed to seek and destroy disease-causing invaders, such as viruses, bacteria and parasites. In immunotherapy treatments, physicians take T cells from a patient’s blood, re-engineer them with antibodies designed to attack cancer, grow them in the lab and put them back in the patient.

The manufacturing and quality control of these treatments is in its infancy. Only activated T cells are useful in treatment, and the other cells may actually harm the patient, says Walsh.

“There are still a lot of toxicities with these treatments,” Walsh says. “If something goes wrong when making therapeutic cells, they can start attacking the patient’s healthy cells and people can get really sick.”

Walsh’s invention provides a better way to sort those T cells with the best killing capacity. It measures the unique signatures of activated cells, which are enlarged and give off a brighter glow — almost as if they’re getting pumped up for battle. Since the technology uses infra-red light, the cells are not damaged or changed in any way, and can be safely given back to patients. 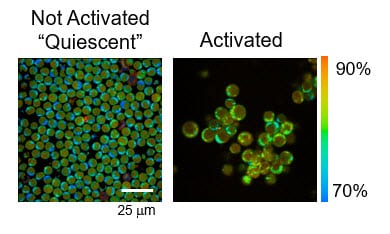 Representative NADH fluorescence images of T cells. NADH signal comes from the cytoplasm and mitochondria while the nucleus remains dark. Color represents the fraction of “free” NADH. Activated T cells have a greater amount of free NADH, as indicated by the shift from blue to red.

Now that they know what to look for, the team will try to develop technology to corral the most clinically useful cells. They also want to begin testing on cultures from patients with cancer and compromised immune systems to measure the performance of T cells.

“We know the concept works, but the engineering problems come next,” says Skala. “Is it cost effective, accurate and can we integrate into the clinical workflow?”

An independent panel of judges selected the two WARF Innovation Award winners from a field of seven finalists drawn from among approximately 400 invention disclosures submitted over the past 12 months. The other winners were mechanical engineers Tom Turng and Haoyang Mi, who developed small-diameter vascular grafts to be used in the treatment of cardiovascular diseases.

The Wisconsin Alumni Research Foundation (WARF) has been a major supporter of the commercial potential of Skala’s T cell imaging technology. The project is currently in the WARF Accelerator Program, which gives inventors support to bring promising technologies to the marketplace. The imaging technology also was the 2018 winner of the WARF Innovation Award, the top technology chosen from more than 400 UW-Madison invention disclosures that year.